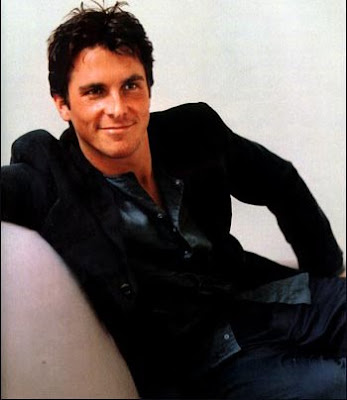 Been thinking about Christian Bale lately, if for no reason, other than he's hot.

I would just love to have been that actress in the Malick film The New World who is forced to choose between Colin Farrell and Christian Bale. Why doesn't life give me such tough choices as that?

I've actually not seen any of his Batman movies, believe it or not, but I loved him in The New World, American Psycho, Rescue Dawn, and even in The Machinist, where he's deathly thin. He's the hottest anorexic I've ever seen.

I like him both shaved and scruffy. He looks hot either way. His analysis is referenced in the PBS series POV's brochure (p.26) on The Up Series. His writing and criticism has been lauded in the mainstream and alternative press, nationally and internationally, in the Far East and the U.K, by diverse arts and film blogs and websites, as well as by America's most powerful critic, Roger Ebert of the Chicago Sun-Times and several television film review shows.

Roger Ebert praises Dan Schneider's Film Criticism and Website: Ebert calls Dan Schneider 'a considerable critic....'' that Dan Schneider (in regards to Ebert's writings) 'may well be correct in some aspects. What his analysis gives me is a renewed respect and curiosity about his own work....'; he states, 'Dan Schneider is observant, smart, and makes every effort to be fair.' He states, 'I conclude he is more analytical and less visceral that I am,' Ebert ends his praise, stating, 'What is remarkable about these many words is that Schneider keeps an open mind, approaches each film afresh, and doesn't always repeat the same judgments. An ideal critic tries to start over again with every review.' -12/9/09, from 'Who do you read? Good Roger or Bad Roger?', by Roger Ebert

....helpful criticisms regarding his fellow poets and reviewers. If you were looking for someone willing to call T. S. Eliot '1 of the most grossly overrated writers in the history of the world, & the English language,' Schneider is your man. His site includes similarly jolly commentary on a large number of contemporary writers.- The New York Times

Schneider is a fervent, naturally agitated character, and he seems possessed of a boundless curiosity that stretches from the most obscure backwaters of science and history to the dimmest and most short-lived pop-culture comets….Schneider's peculiar temperament has more in common with unregenerate early punk rockers like Lou Reed and John Lydon….It's surprising how many of Schneider's poems reveal a frequently poignant strain of sentimentality and nostalgia, a continued fascination with the lost pop culture of his childhood. He is also an obsessive sonneteer, and can write tight, carefully crafted short poems that demonstrate the emotional sensitivity that many of his admirers suspect he doesn't entirely trust.- Dan Schneider vs. The Rest Of The World, City Pages

....for a clearly anti-establishment take on the academic poetry scene, as well as fearless, brilliant assessments of many poets, including the famous, with which you may or may not agree (again, it's informed debate that spurs our progress)- try Dan Schneider's www.cosmoetica.com. -page 192 of On Writing Poetry, by Al Rocheleau, Shantih Press, © 2010, published 2011

www.Cosmoetica.com.... the most visited, unaffiliated literary website online. He [Dan Schneider] is a poet, critic, essayist and fiction writer first profiled in City Pages in 1999. He is known for his trenchant, outspoken views, peerless criticism, and writerly excellence. Schneider is also known for championing Neglected Poets, stands against bad writing, academia, Political Correctness, and for his ‘re-discovery’ of expatriate African-American poet James A. Emanuel. Cosmoetica has served as the launching pad for a number of other promising writers, and has grown in popularity due to its popular essays....- Nationmaster.com


Cosmoetica is also home to The Dan Schneider Interviews....(b)elieve me, you won’t find more in-depth and high-minded discussions this side of a MENSA jamboree....You’ll especially love Dan Schneider if you’re tired of the same old crap that Hollywood has been pumping out in recent years....This is one moviegoer who really knows what he’s talking about....In fact, you could say that he’s relentless when it comes to getting his point across. On the other hand, every thought is backed up by sentence after sentence of explanation, and those looking for an in-depth movie review or film interview will have plenty to feast upon. And he’s even got the respect of Roger Ebert. - Only Good Movies

I think it is high time every lover of contemporary poetry reads Dan Schneider’s essays on www.cosmoetica.com. Why? For starters, he is goddamn refreshing in his unashamed way of putting just about any critically-acclaimed or seriously up-and-coming poet in his or her place by making us see just how overrated he believes so many of them are....you may just be unable to help yourself but want to agree with Schneider in any case. He is that fun to read, as well as potentially edifying. - 'Dan Schneider Connects The Dots', Quarterly Literary Review Singapore

(Dan Schneider) hates bullshit, he feels passionately about his subject, and is not afraid to speak his mind. He reads stuff in great detail, thinks about it hard, and is totally undeterred by PC. All of these, in my book, are virtues.- 'Even grumpier than me!'- Grumpy Old Bookman